Something about me? I knew a guy who wanted to put a ceiling fan in his pickup truck. For serious.

I was born the son of a sharecropper…err…no, no I wasn’t. I was born in East L.A…..no, not that either. I was born in Erie, PA 40+ years ago. I grew up in Northern Indiana, went to college in East Central Indiana and now live in Southwestern Ohio. I have no understanding of time zones and hate them with a passionate fury. Also, not so keen on spiders and needles. Needle-bearing spiders who ask me to tell them what time it is in California are right out.

Call me Ishmael…no, no, I’m doing it again…call me Kathy. Nice to meet you.

If you haven’t guessed yet, I’m odd.

Real Deal Backstory: I grew up in Northwestern Indiana, in a very small town (population as of 2010 census is around 3,700).  Because of this, I have a tendency to side-eye shows that try to pass off places with populations of 10,000+ as ‘small towns.’

Also, my hometown is in its own timezone — as is another small town  (Correction as of 1/2/19: SEVENTEEN) miles from it.  Since I now live in Ohio, this only impacts me when I see my town listed on Internet blogs/forums as an option for setting your personal clock. I usually pick my home town out of a sense of loyalty.

Edit as of 1/2/2019: I have photographic evidence of my home town’s timezone status and it comes from WordPress itself!

The yellow-green box, Knox, is my home town. The purple box, Winamac, is the town that’s seventeen miles away, yet in a separate timezone.  For the record, the rest of the cities/towns on the list are between two to five hours from Knox and most are in southern Indiana.

And, actually, I’m from an even smaller town outside of the small town that was on our mailing address. That place has a population of maybe 12? Depending how you figure population. The main landmark is a grain elevator.

These days, I live in the big city! Well, a big city. In Ohio. Dayton, I live in Dayton.

Explanation as to the Blog’s Title: Doomsday Writer is a play on the title of a 1980s men’s adventure series called Doomsday Warrior. The series is total 80’s Cold War cheese at its problematic best (or worst, depending how well you can stomach flag-wrapped goofiness).  I have all nineteen novels in both original 80s paperback format and in Graphic Audio audio book format (of the two, I recommend the Graphic Audio versions because one: full cast, with music and sound effects and two: it’s the difference between cold string cheese and the best mozzarella stick you’ve ever had (which for me are the cheese sticks from a local place that are like a grilled cheese sandwich).

I first read the books back when I was a teenager, like around 14 or 15, and to me they were just awesomely cool. As an adult….the covers are still cool.  The editions I have are all variations on this theme: upraised fist forms part of a mushroom cloud and is clutching an object, usually a weapon (a gun, a Kewl Knife, etc.), sometimes a Significant Object (like the Constitution or the Statue of Liberty). 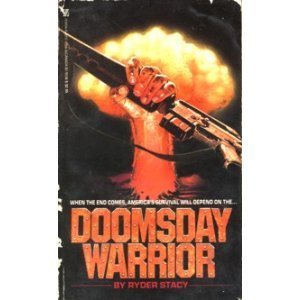 7 thoughts on “About Doomsday Writer”